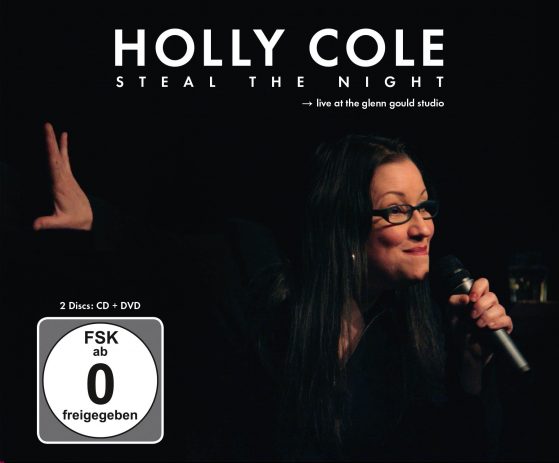 „Steal The Night“ is Holly Cole’s second live album (after „It Happened One Night“, 1996). It comes as a cd/dvd package, making this her long overdue debut on dvd. Put together with utmost care and attention, this concert features top quality interpretations of songs from every phase of her career, including classics like “Calling You” or “I Can See Clearly Now” – all recorded and filmed in front of a live audience at historic Glenn Gould Studio in Toronto. The DVD also comes with some fascinating extras, including three film documentaries that chronicle the artist’s personal history with family and musician friends, also her mutual love affair with audiences in Japan.

“Have you met Miss Cole? In the past, this – slightly modified – question from the title of a famous Rodgers & Hart classic had to be answered negatively when it came to Holly Cole live on DVD. Fortunately, “Steal This Night” puts an end to this frustrating situation by presenting a wonderful concert filmed at a legendary place: Glenn Gould Studio in Toronto. After many albums and concerts in Canada, the US, the Far East and in Europe, the celebrated songstress from Canada finally presents a live concert performance on CD and DVD. It stands as a many things at the same time – among them a nice encounter with a hometown audience on home turf, also a reunion of the original Holly Cole Trio featuring pianist Aaron Davis and bassist David Piltch. The band is completed by Davide Direnzo (Drums), John Johnson (reeds) and Bob Piltch (guitar). But mostly “Steal The Night” stands as another demonstration of Holly Cole’s immense talents as a performer – highly musical, profoundly intelligent, exquisitely intense.

The “Steal The Night” event took place in August 2011 and this recorded document was released in Canada only six months afterwards. Finally, it’s coming out in Europe as well. As the concert was organized with the utmost attention and care, the result is filled to the brim with quality – technical, musical and emotional. Singer and band present a repertoire that include favorites from all stages of Holly Cole’s career – 9 songs on CD, 11 on DVD, excluding an additional live track in the DVD’s bonus section, next to fundamental biographical info about all players and three fascinating documentary films („Holly In Japan“ / „The Trio“ / „Coming To Toronto“).

It’s well known what makes Holly Cole special: the emotional complexity of her interpretative approach, the unique attention to detail, a strong sense of minimalism, space and silence –creating tension and beauty as a result. All of this filtered through a telepathic sense of understanding with musicians who know every nuance of the music. They create the musical whole with authority and ease, an infallible sense of feel, color and expression. It’s probably fair to say that due to all of this, Holly Cole’s music today is richer, more sophisticated and more subtle than ever before – even when it comes to song staples she has sung many times. Some of them are present here: “Calling You”, “I Can See Clearly Now”, “Train Song” and others. They are songs that have played a major part in the singer’s career. And with all respect due to the singer’s expert work in the studio, it’s on the concert stage where she really shines the most. Her unique talents comes to the fore – improvisation, fun, intensity, entertainment, audience seduction. Musical magic made possible.

A special mention is more than apt for the DVD’s three extra films: „Holly In Japan“ talks about the special love affair between the artist and her Japanese audience. The Far East has embraced her from the beginning, she is considered a role model for modern 21st century women, smart and strong, sexy and romantic. Her music is viewed as individual artistic expression belonging to more than just one category, whatever that category may be. Holly Cole’s attitude seems to correspond with profound far-eastern life principles of personal integrity and fondness of musical intensity. So we accompany the band in Japan a little, we get to know places like Blue Note Tokyo and the “Holly Bar”… The film also presents a ruminative flashback to the terrifying Kobe earthquake of 2009, an event the Canadian musicians had to live through while on tour

.  Documentary 2 „The Trio“ is a recollection of the early days of the Holly Cole Trio in Toronto. Holly, Aaron and David remember their early days of playing together, the first mutual steps as a unit, the phenomenal sense of surprise when falling into a mutual „thing“ almost accidentally – as it was meant to be. The original empathy for each other is still there and respective attitudes still correspond in a rare kind of quality. It’s the story of a musical quest leading to deep connections on a personal level.

Finally, „Coming To Toronto“ is adding a very important group of people to the picture: The Cole Family. Parents Leon and Carolyn Cole plus older brother Allen Cole, music people all of them. They reminisce about the daughter / sister they knew and still know. They also tell loving and humorous stories of days gone by. The Cole Family are obviously full of pride and respect for what their younger female member has achieved: “She has chosen her own path,” Carolyn says and the loving look on her face makes for a window into the family’s distinctly positive emotional make-up.

“Steal The Night” is one more fascinating step on this path. To watch Holly Cole take it is a joy and a pleasure to behold.